Sure, I suppose you can be square and hip, but it has nothing on how chic, affordable, modern and stylish reaches the full hip heights.

And that’s what the ALT Hotel Winnipeg‘s 160 rooms, 20 floors, and seven meeting spaces are all about.

It’s not even a year old yet (it just opened in late April, 2015) but already it is one of Winnipeg’s most-talked about properties along with being cited by National Geographic Traveler — in their article noting Winnipeg as one of the 20 Best Trips for 2016 — as the place to stay in the city.

And how could it not be, as this is one centrally-located, well-curated property.

For starters, all the rooms are just $149 (CDN) per night, which gets you the option of one or two queen beds (the mattresses are ridiculously comfortable, and the lines are Egyptian cotton). The rooms are handsomely designed, with sleek walk-in showers featuring Bella Pella products (they smell so good), a jazzy little workstation with ergonomic chairs, a flat-screen TV, and individual pieces of art from Winnipeg artist Cliff Eyland. Plus, being situated right in the middle of downtown, the majority of the rooms have expansive views of the city.

The aesthetic of the hotel is minimalist, with exposed cement throughout offset by an incredible amount of natural light as nearly every window — from the lobby, to the guest rooms and conference rooms — runs from floor to ceiling. I’m particularly fond of the sleek bathrooms, whose showers feature a wall of semi-transparent glass that faces out into the bedroom area. The purpose of this, aside from adding a spicy little voyeuristic element, is to allow all the natural light to pour through, much like how the water cascades from the stylish rain shower heads.

But don’t just take it from me, read their reviews on Trip Advisor. Between the “super helpful and friendly staff” and the “amazing and extremely clean” rooms this place gets more raves than the newest Star Wars and Mad Max combined.

As to curation, well I tell you the folks behind the ALT have utilized some of Winnipeg’s finest into help making this hotel outstanding.

For instance, as soon as you walk into the swish lobby you are met with a giant mural composed of 2,600 Winnipeg images by photographer Bryan Scott. One unique feature in the installation is a screen that you can add your own photos to by tagging them #altexpo on Instagram (which is easy to do as they have free WiFi everywhere).

Beside the front desk they also have a nifty little snack bar called ALTCETERA where you can grab snacks (including sandwiches from Nick’s on Broadway), pastries, and gourmet coffee and teas from local producers. If you are in the mood for something a little more substantial, well one of Winnipeg’s best new restaurants also happens to be in the hotel.

The Merchant Kitchen is a rocking place that serves globally-influenced elevated street food. Its Korean fried chicken and Thai fried rice have already become a thing of legend, while the menu is full of dishes for peeps of all tastes from the super food salad, to wok roasted Brussels sprouts, to Vietnamese-style duck rolls, to the drink menu that is full of awesome hand-crafted cocktails like the five-spice Dark ‘n’ Stormy.

The Merchant is always busy before and after events at the MTS Centre, one of North America’s busiest venues, located literally (like literally, literally) a convenient 115 steps from the ALT’s front doors.

Of course, this makes the ALT Hotel a perfect place to stay when coming to the city for events at the MTS Centre, while the rest of downtown — from the theatre district in The Exchange, and the RBC Convention Centre Winnipeg — is just a couple blocks away. #locationlocationlocation

If you are in town for business, or have a business in Winnipeg and are looking to meet with clients, they also have some stylin’ meeting spaces that you can procure, while their gym is a great place do your morning cardio while thinking of your next marketing move as you look out over the city.

At the ALT Hotel Winnipeg they’ve thought of everything, including free bikes in the spring/summer/fall (@AltHotel)

So next time you are heading to The Peg, and you are looking for a sweet-spot property right in the middle of all the action, book yourself at the eco-friendly ALT Hotel Winnipeg. You’ll be glad you did.

As I told Missus Peg when we were leaving Marriage: A Demolition in Two Acts at Prairie Theatre Exchange (P... 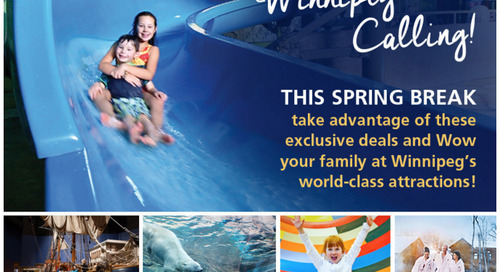 In case you haven’t heard, The Peg is a winter hot spot — and our spring can be equally as good! Travel wri...